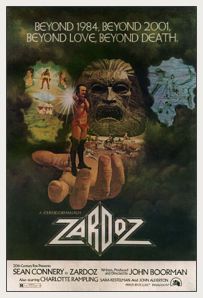 Zardoz, 1974. In a post-apocalyptic future, a giant flying stone head named Zardoz rules over the warrior class, indoctrinating them with wisdom like “The gun is good; the penis is evil.”

Wait, I’ll start again: It’s 2293, and the earth is populated by The Brutals, who suffer under the reign of the Exterminators (a.k.a. The Chosen), who in turn are ruled by Zardoz, who (did I mention?) is a giant flying stone head that belches out firearms.

Hang on, this doesn’t seem to make sense. Okay: Zed (Sean Freaking Connery!) assassinates the Immortal Eternal pilot (yeah, don’t ask me how you kill an Immortal Eternal) of the giant flying stone head that rules over the…

Um. Look: Zardoz was made in 1974; director John Boorman was given carte blanche after the spectacular success of Deliverance, which relied on the terrible simplicity of human nature and a perfectly unaffected setting. In striking contrast, Zardoz features Sean Connery dolled up in red leather briefs with criss-cross suspender straps, dramatically flared thigh-high boots, and a Yosemite Sam mustache, a get-up that in no way enhances his overblown macho posturing as he bounds around a dystopian landscape (and into another dimension, or a vortex, or, uh, something) trying to undermine the totalitarian regime of, yes, a giant flying stone head.

6 thoughts on “Zardoz: a movie review”