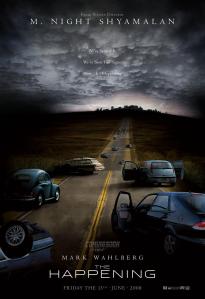 Like many moviegoers, I was thrilled by M. Night Shyamalan’s The Sixth Sense, and I positively shivered to think of the exciting stories he would tell a generation of viewers.

The Happening (2008) is a frustratingly vivid illustration of that hope, sustained and smashed in one blow. Revolving around a mysterious but pervasive danger, graced with witty art direction that winks playfully to the viewer in almost every scene, and blessed with a potent use of ambient sound, this movie should be good. Better than good — it should be a work of subtle menace on par with Hitchcock’s The Birds.

But it ain’t. The problem, as so often in Shyamalan’s films, is in the dialogue and motivations: the tone-deaf, stunted interactions between the cardboard cut-outs who prop up the story. It’s infuriating to see the central characters used as mere wind-up toys driving the plot — especially when the peripheral characters hint at such absurd richness.

In a fever of frustration, I finally opened the DVD audio menu, switched to another language, and discovered to my delight that with the dialogue obscured a bit, the film’s visuals and sound well up and mute the petty stupidity of its script. It’s no masterpiece, but it’s an effective and fun little chiller. The bad news: if you’re fluent in Spanish. French, and English, you’re out of luck.

1 thought on “The Happening: a movie review”